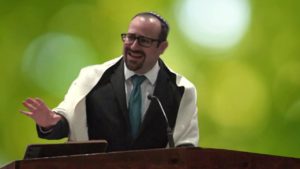 Chanukah was always a special time for me growing up. I have such fond memories of lighting the candles and saying the blessings with the whole family, mom included. I loved that their light would grow day by day until we had a full shining menorah. In my family, we would always try to guess which candle would burn the longest, and there was often breathless silence followed by cheers and groans when the last faint blue shimmer became a thread of smoke. The winner earned bragging rights for 24 hours.

Chanukah begins on December 10 at sundown. There is a mystery of the first night of Chanukah. When the ancient Jewish heroes, the Maccabees, drove out the oppressive Syrian Greeks, they famously found enough oil in the Temple to burn for only one night and day. A miracle occurred and the small amount of oil continued to burn for seven additional days, which is the miracle we now celebrate. But what was the miracle on the first night? The oil burned normally for the first day, so why do we celebrate for eight days and not just seven?

One answer is that the miracle of the first night is a completely separate miracle. What we celebrate on the first night is that the Maccabees knew to look for the oil at all. King Antiochus had controlled and desecrated the Temple for more than a decade. Every trace of Jewish practice was eliminated with great prejudice. The Maccabees had no reason to suspect that there was any oil left, but they checked anyway. Even more miraculously, they found a single cruse. Can you imagine the odds against that? A single small jar, overlooked for a decade, never broken by a careless soldier or animal running through the Temple? THAT is a miracle.

The Maccabees were guided to it by a different kind of light than the one that would burn for the next eight days. There was no literal shining light from heaven, but rather the light of hope that drove them to believe that there must be a way for them to rededicate the Temple. They believed that God would make it possible. So they searched for the impossible oil and they found it.

As a child I liked lighting candles (and opening presents too), but it was the Chanukah story that always moved me. It celebrates a miracle of light, and the victory of the righteous over the powerful. I think that idea is central to Jewish identity. We always believe that light will triumph over darkness, and might does not make right. Jews have always been champions of hope in the face of the impossible, whether it meant defeating the world’s greatest army or finding a cruse of oil in the desecrated Temple.

That oil is a lot like the Jewish people. For everything working against us, it is a miracle that we are still here. Yet the light of hope has always sustained us. It’s as true today as it was 2200 years ago. Even a tiny candle can illuminate a completely dark room. And a little bit of light dispels a whole lot of darkness.