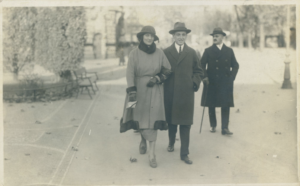 This year, we are joining together with the City of McAllen to host the first ever McAllen Holocaust Remembrance Day Ceremony, to be held at the McAllen Public Library Auditorium, 4001 N. 23rd St., on Thursday, May 23, 2019, with a reception starting at 6:00 p.m. and the program to begin at 6:30 p.m. The event is free, open to the public, and welcome to people of all faiths and most importantly, ages.

“It is important for all of us, people of all faiths and races, to remember the Holocaust because it shook the foundations of modern civilization,” said McAllen Mayor Jim Darling. “Its unprecedented character and horror will always hold universal meaning. We must vow to never forget this sin against humanity. However, one only has to look around the world to recognize that the lessons of that horrible time in the collective history of human beings seem to have been forgotten. This ceremony will help spread the message that in McAllen, we have not forgotten.”

The first part of the program will feature speaker, Tim Lorsch, who is the son of Holocaust survivors and has created a musical memoir in honor of his family and their experience during this time. Lorsch performs The Suitcase, a one-man, one-hour show based on his German Jewish heritage. Through music and story, the performance shares his relatives’ lives in Germany, their experience of the Holocaust, how they fled the Nazis, became immigrants, and established a new life in America.  All of the music is original and performed live with looping technology on violin, octave violin, and cello. The piece reflects the vulnerability, hopes, dreams, and resilience of immigrant families.

“I am so honored to share my family’s story of tragedy, sorrow, escape and ultimately, triumph with the entire McAllen community, both Jewish and non-Jews,” said Lorsch. “This is a universal story for all of us children of immigrants who escaped persecution and triumphed with the next generation here in America.”

“We are honored to join the City of McAllen in hosting the first annual Holocaust Remembrance Day celebration,” said Phil Brown, Temple Emanuel president. “Especially in light of recent attacks against synagogues in the United States, it is important to take few minutes to remember the terrors of the past so that they can be avoided in the future.  We must not forget; this ceremony helps to that end. “

A reception, hosted by McAllen ISD IB students and sponsored by Macaroni Grill and Tony Roma’s will be held prior to the start of the ceremony, where the exhibit, The Texas Liberator Exhibit, on loan from the Texas Holocaust and Genocide Commission, will be on display. The Texas Liberator Exhibit features Texas veterans of the Second World War and who played a role in the liberation of concentration camps across Europe. Developed by Texas Tech University, the display captures d the extremes of savagery and fanaticism, humility and humanity of World War II from the perspective of the American soldier.

During the reception, a musical performance by Dr. Mike Gersten, a history professor at South Texas College, and his wife Meredith Gersten, as well as Patrick Hopkins, will showcase original music composed by Dr. Gersten with a grant he received from the Texas Holocaust & Genocide Commission. Additionally, books and resources regarding the Holocaust and other genocides committed throughout the world will be on display. Attendees will be able to decorate or write messages on special butterflies that will later be on display at our Temple and the McAllen Public Library.